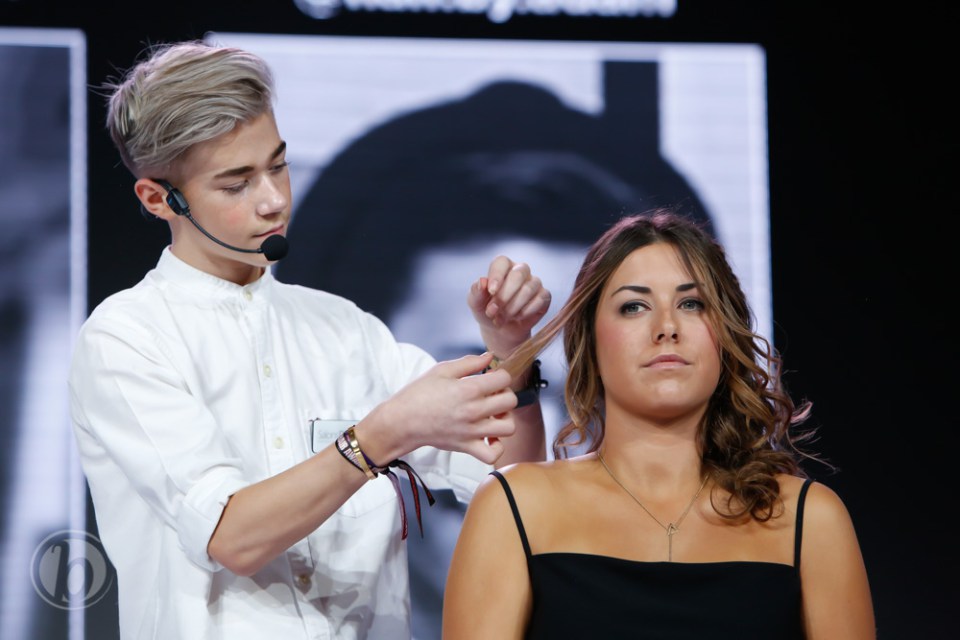 For those of you not familiar with Adam Winwood where have you been? Though we’re pretty sure you’ll have seen his work on Instagram where you can find him @hair.by.adam. At just 15 years old, Adam is taking the hairdressing world by storm and has recently returned from a memorable trip to America where he was a finalist in the Behind The Chair oneshot hair awards. This is his exclusive diary of the fantastic experience, we hope you enjoy it! 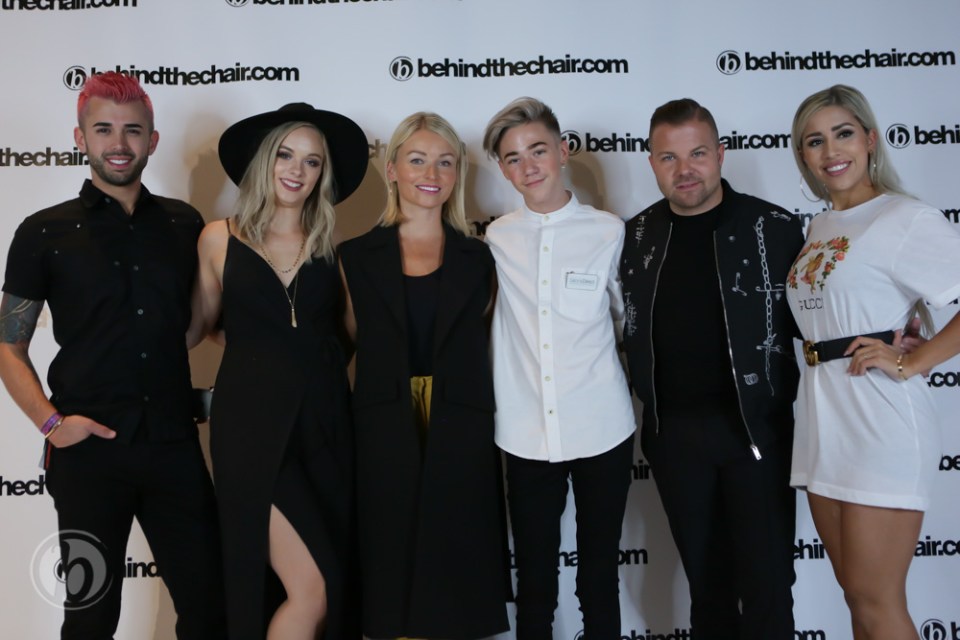 On being nominated as a oneshot finalist…

I got a fantastic surprise when I woke up and looked on my phone to find that I had become a finalist for the oneshot competition with Behind the Chair! I had entered this competition with a few different entries and it turned out, that out of 311,000 entries worldwide, I was a finalist in the up styling video section. Wow! Me, go to the USA… for a show? – Now there’s a joke! How could we ever afford to do that? A few people told me to ask for donations to help fund the trip with the hope that you never know, it may just happen…And it did.

Salons Direct contacted my mum and said they would like to sponsor me to go to San Antonio for the BTC show and awards. Both my Mum and I were absolutely over the moon with the offer and could not believe that we were going. My first thought, me being me was of course, ‘What can I wear?’ I mean you’ve gotta look good, haven’t you? After all, I’m about to meet some of the biggest people in the hair industry. So after a little bit of shopping and a bit of fake tan we were off, after 24 hours travelling, we finally arrived in a very warm San Antonio. 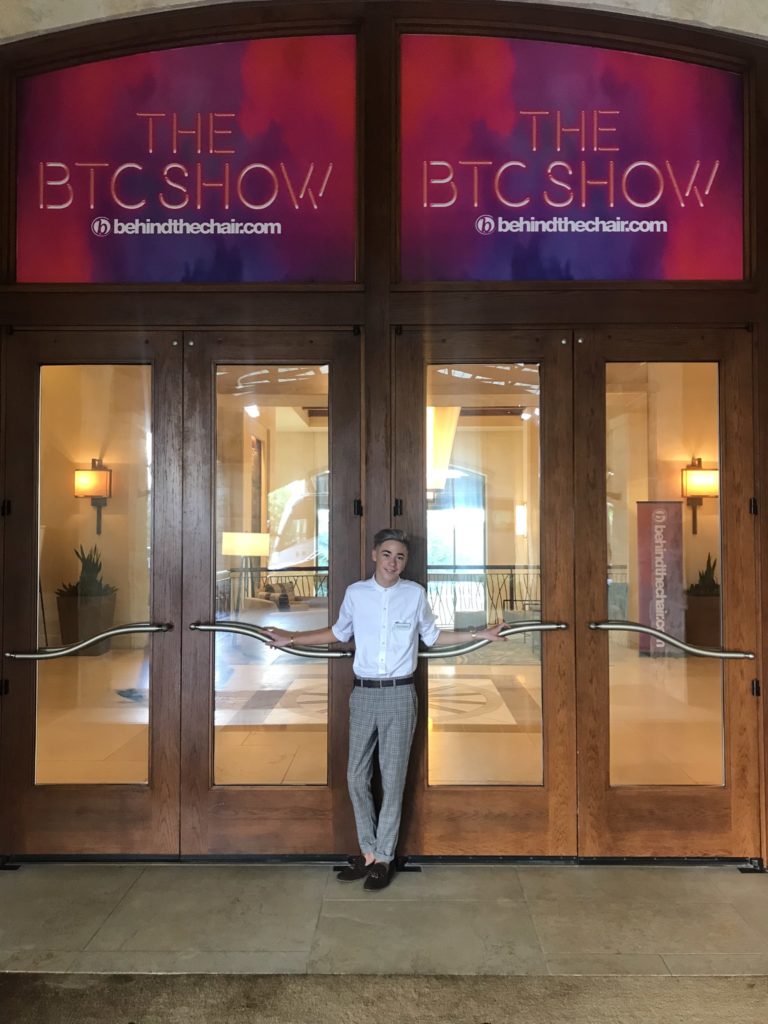 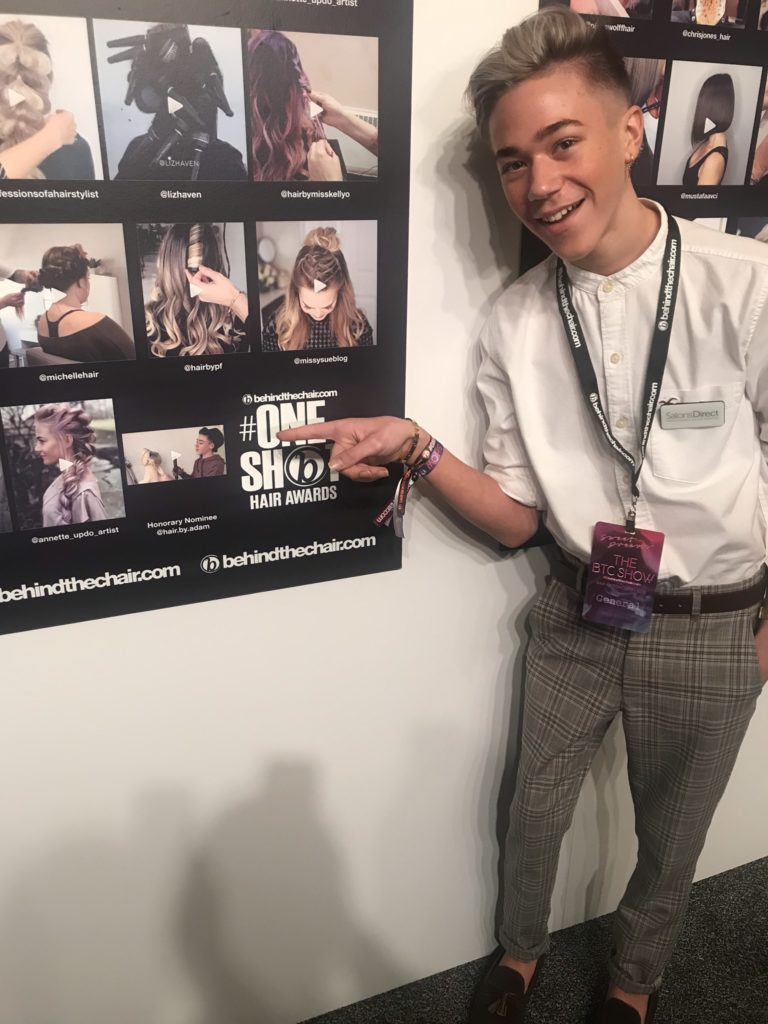 At the oneshot hair awards…

Sadly, I couldn’t actually win the competition as I am only 15 and needed to be a licensed hairdresser. But, how amazing to have even been nominated alongside the hairstyling GIANTS? After a lovely breakfast, we made our way to the Marriott hotel where the show was being held – it was the biggest hotel I had ever seen – an absolutely beautiful hotel set in jaw-dropping grounds.  We registered and received our tickets and swag bag and wow that was a HEAVY swag bag (shout out to mum for carrying it!) 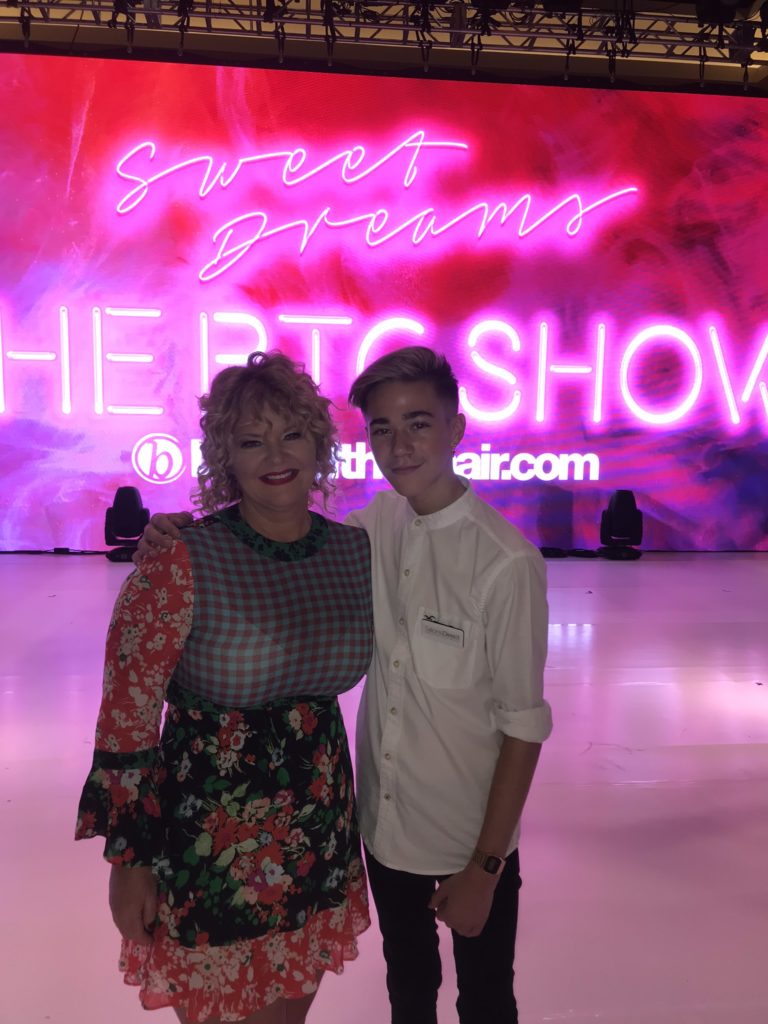 The oneshot founder, Mary Rector Gable made me feel very welcome and after lots of pics, she then invited me to appear on stage and do hair on a model. Now that’s scary! We spent all day meeting and chatting with people and watching fantastic stage education shows from amazing brands like Matrix, Redken, Amika, Schwarzkopf etc. Then we went back to the hotel to get ready for the awards show. Even more excitingly, I had a message from Mary’s daughter Quinn, asking me if I would like to present an award on stage – of course, I said I would!

At the awards ceremony… 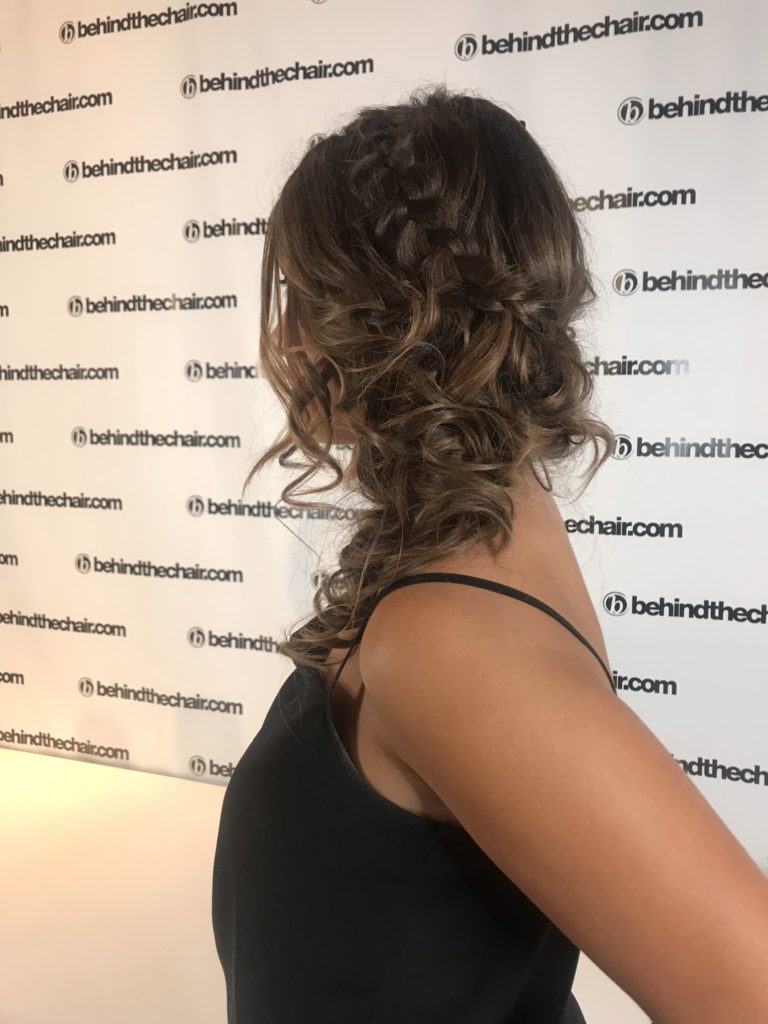 Later on, we arrived back at the Marriott for the awards evening, I have never seen so many people. It was such a buzz watching everyone win their awards. It was then my turn to get on stage with the lovely Jordan Pomeroy (aka @jbraidsandbows on insta) to present the award. I got such a fantastic welcome from the commentator and the audience when I walked out it was unbelievable – we presented the award and then drank the “shot” of water to congratulate the winner.

Day 2 of the oneshot hair awards…

The following day was a lot like the first I met and spoke to a lot of people – I had a lot of photos taken with fans who just wanted to meet me and congratulate me on my nominee and my award presentation – I watched a lot of inspiring people on stage my favourite being Chris Appleton – I mean who wouldn’t like the man who does the Kardashians hair!

Tuesday came along and I was now getting extremely nervous about going on stage. After a strong caramel Frappuccino from Starbucks, I went off to meet my model and prepped her hair. I got miked up and I was off ready backstage for the biggest experience of my life. BTC had put a huge picture of me on stage even showing my good side haha and I was introduced onto the stage to the most warmest welcome ever and a very loud applause.  I styled the beautiful Sarah and talked about what I was doing! 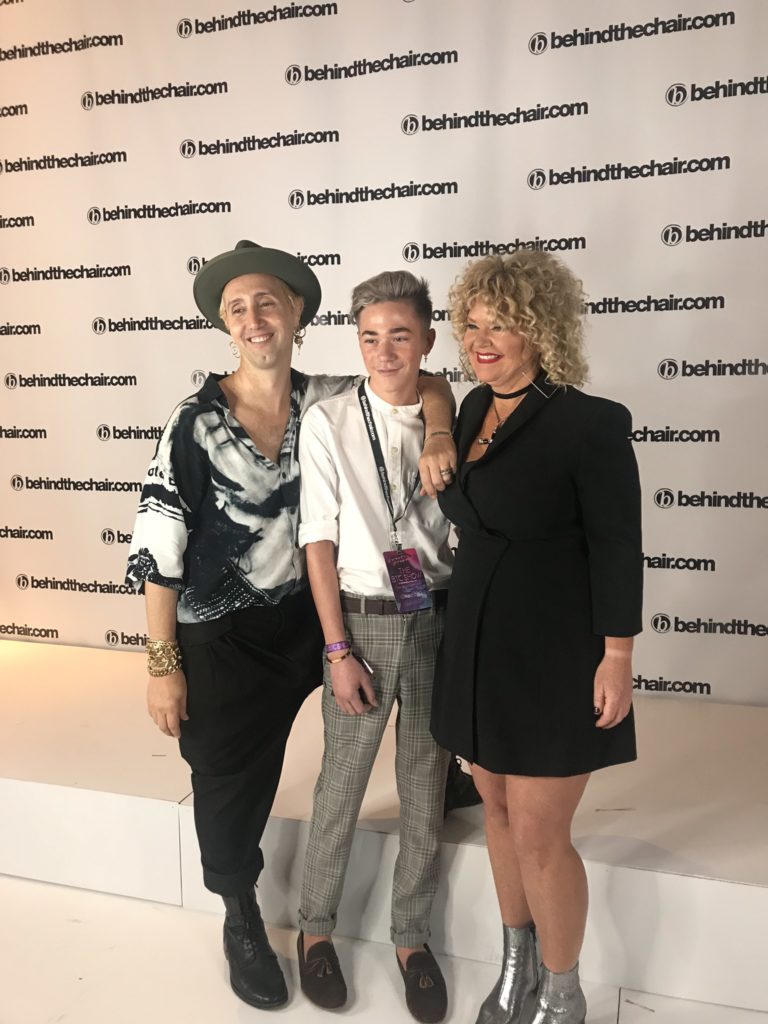 It was such an experience and I don’t know how I battled the nerves but I did and I’m pretty proud of myself! There were about 3500 there watching. Well not long after that, the BTC show came to an end – I stayed behind and had a final chat to Mary and some of the other BTC show people that I met before heading back to the hotel. I felt really sad saying goodbye to everyone who had been such an inspiration to me and such a pleasure to meet – I really did not want it to end. 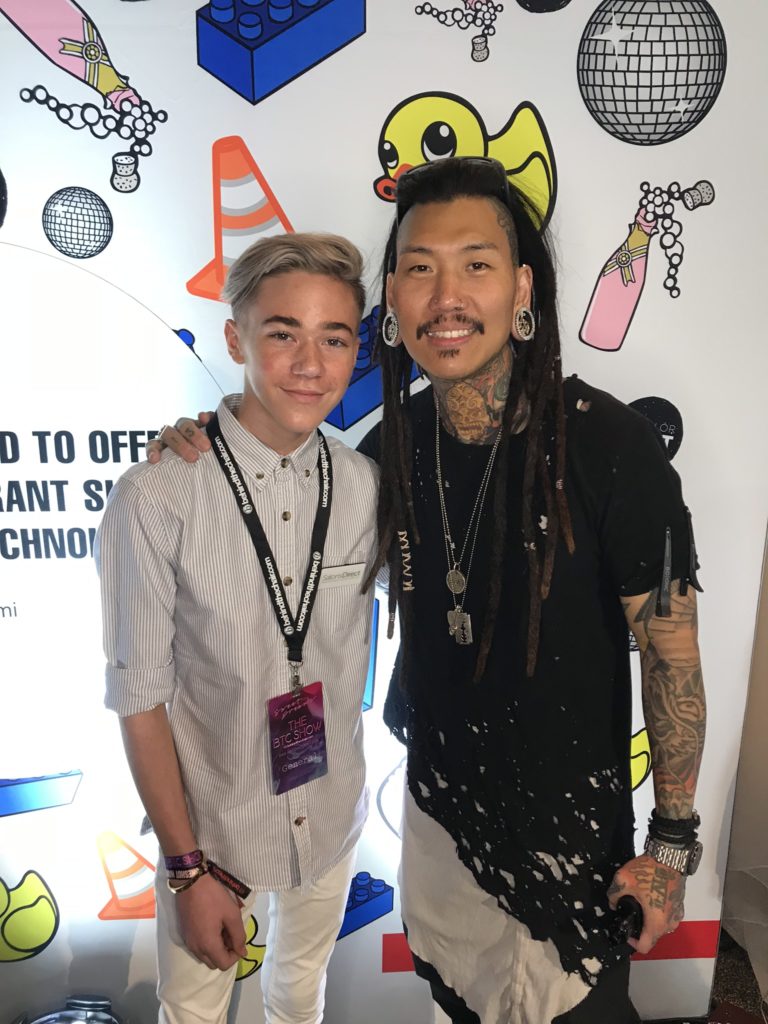 We got changed and went “downtown” to see the Alamo – now that’s a pretty amazing place and had a little walk around by the river – and how beautiful was that place – absolutely gorgeous but very very very hot.  Whilst down by the river I had quite a few people asking for photos again and congratulating me on my stage performance – now I know how celebrities feel !! This didn’t stop here either – it continued at San Antonio Airport – on the plane – and at Atlanta airport haha. I couldn’t believe it! 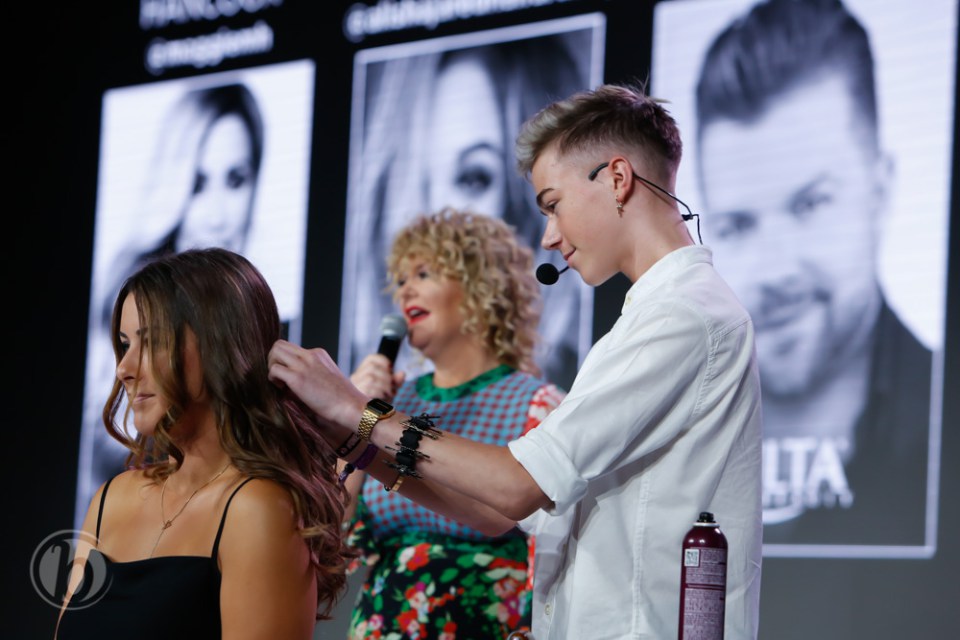 This was an absolutely fantastic trip,  to be nominated was enough but to have the privilege to go to the USA – to meet such fantastic people – to learn so much from the stage education from some epic educators and to have my debut stage presentation – well it was amazing and it’s all thanks to Salons Direct for making this possible for me – without the support of Gareth, Danielle and Jen this trip would never have been possible and to them I will be forever grateful.

Shop all your hairdressing supplies at Salons Direct today!