What made you want to get into the industry to start with and what advice would you give to someone starting out?

15 years ago I had every intention of becoming an osteopath; it looks like I got sidetracked along the way! Back then I was working full-time in the probation service while seeing massage clients in the evenings, trying to raise enough money to go back to college. Responding to demand, I started offering waxing to my male customers and then went on to do my full beauty NVQ. When things got too busy to work from home I opened the Axiom men’s grooming salon in the basement of a local barbershop, left the probation service and soon decided that beauty therapy was far more exciting than osteopathy.

We set up the Wax Academy training programme in 2007 as a way of sharing our passion with other therapists, and last year we staged The Wax Show, the UK’s first educational conference dedicated to the art of hair removal. That was certainly a steep learning curve for both of us, but the day was a huge success and we’re already planning the next one.

You need an open mind and a healthy sense of humour to do this job, but I love my work and can’t imagine doing anything else. For anyone thinking of making the leap, I’d say wholeheartedly “go for it!” Words of wisdom from the other side: invest in ongoing training, look after your customers (never forget that they pay your wages) and dare to be different. 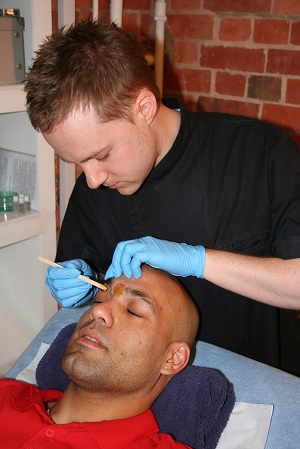 As males in the industry you are in a definite minority, do you feel this has ever been as issue?

It’s encouraging to see a greater number of male therapists join the industry over recent years, and I hope this trend will continue as salon services for guys become more widespread. When I started out, lots of people told me that male customers simply wouldn’t come to another guy for skin care treatments and that I’d be bankrupt within a year. I won’t deny it was a struggle at first, but I’ve always maintained that clients will seek out a therapist and environment that they feel most comfortable with. Some customers prefer a male therapist, some prefer a female; many don’t care either way, they just want a great wax that doesn’t hurt!

What waxing products could you not live without¬†

I couldn’t live without my Wahl cordless clippers. They make pre-wax trimming so much quicker and simpler, and I also use them after waxing to blend between areas of hair and freshly waxed skin on places like the lower back and upper arms.¬† Between customers, a swift spritz with Cool Care disinfects the blades and keeps them running smoothly. By adding ‘manscaping’ as a standalone service to my treatment menu, the clippers paid for themselves in no time.

With 2013 coming to a close, what would you say have been the biggest trends in waxing over the last 12 months?

I’ve noticed a definite shift towards a more natural, understated look over the last 12 months. I’m waxing fewer chests compared to recent years and eyebrows are getting fuller again. Even the ever-popular Boyzilian has seen changes, with the vast majority of male customers now opting to leave some pubic topiary above their bald bits rather than whipping it all off. Furry backs and ear tendrils will never be in fashion (thank goodness), but the key look over the last year seems to have been tidy but masculine.

What trends do you see coming over the horizon?

I anticipate we’ll see barbers introducing their customers to a greater range of skin care services. We’re already seeing a widespread return to traditional in-chair grooming treatments like the cut throat shave, albeit with a modern twist, and I predict this is just the tip of the iceberg. Facial waxing, for example, is a speedy and easy-to-learn technique that can be performed right on the shop floor, and adds instant value for customers. We want to be part of the action so we’ve teamed up with The British Barbers Association to offer a ‘Waxing For Barbers’ training course. It’s a great way for salons to capture a new market and stand out on the high street, and the perfect solution for guys who aren’t quite ready to hop up on the beauty couch.

Have you had any funny stories from your time in the trade you’d care to share?

A few years ago I had a very nervous male client in for his first ever Brazilian wax.  All was going well until I turned him over onto his knees to wax his bum. I applied my wax and started to pull the first strip off as normal; at which point my client leapt forward on the treatment couch in surprise. With visions of him diving headfirst off the end of the table, I did what any self-respecting therapist in a blind panic would do: I rugby tackled him around the thighs. There was a moment of awkward silence when it slowly dawned on us that my cheek was now firmly stuck to his (so to speak), before he started laughing. On the plus side, at least I didn’t have a beard at the time, and he’s still a customer to this day; although I’ve since learned to warn clients before ripping the wax off.