What your hair colour says about you 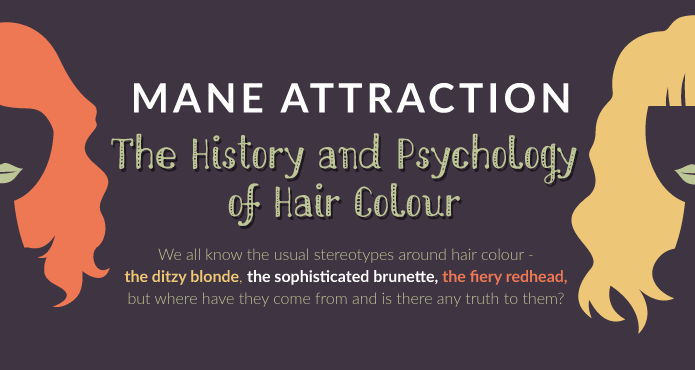 Here at Salons Direct we’re passionate about everything to do with hair colour – especially because we know it’s plays such an important role in how confident a person feels about themselves. That’s why we put together this infographic and article, looking at some of the myths and preconceptions that still surround hair colour, where they’ve come from and if they hold any weight in reality. If you enjoy the infographic please share it using the embed code below or share it!

Please include attribution to Salons Direct with this graphic.

Stereotypes are attached to pretty much every part of our lives, from the way we speak and where we live, to the kinds of films we like to watch and even the foods we enjoy.

And the same goes for our hair colour.

Stereotypes based on the pigments in our hair, just like all other stereotypes, have been formed over hundreds, if not thousands, of years, taking their cues from various social, economic, religious, political or even mythological beliefs.

Let’s take a look at some of the stereotypes that have been formed around the three main hair colour groups – blondes, brunettes and redheads.

As far back as Ancient Greece, blonde hair has been synonymous with beauty and love, often seen as a symbol of desire.

The Greek Goddess of Love, Aphrodite, was often depicted in paintings as having beautiful, flowing blonde hair, whilst Renaissance artists also portrayed blonde women as the height of natural beauty – one of the most famous of examples being Botticelli’s The Birth of Venus.

In Ancient Rome, however, prostitutes were required to bleach their hair blonde or wear a blonde wig in order to set themselves apart, whilst the more affluent would sprinkle their hair with gold.

Brunettes and those with darker hair have also long since been a symbol of attraction. Those with the darkest hair, from Asia, South America and Africa represented the exotic for many Western countries, and so women would often try and replicate this allure with dark hair dyes.

Public figures have been fiercely protective over their dark hair. One such example was actress Audrey Hepburn who refused to dye her distinctive brown hair for a part, instead sprinkling it with gold dust.

Redheads have traditionally been given a bit of a hard time over their hair colour, and it seems this goes back quite a long way.

Philosopher Aristotle once said that ‘reddish hair’ was a sign of bad character, whilst the ancient Romans said the Gauls dyed their hair red to ‘terrify and appall’. In the Middle Ages, having red hair was even considered to be a sign of witchcraft!

However, archeological records from Africa have shown that women used red ochre and other red pigments as a sign of their fertility.

So we know a little about where our preconceptions around hair colour have come from, but how has that translated to our modern day life? Do we still judge people based on the colour of their hair?

Here are some facts and figures that might just shock you…

Do blondes really have more fun?

Those Ancient Greek and Roman stereotypes of the beautiful blonde still holds weight amongst many today, particularly when it comes to the male gaze. 26.8% of US women are blonde, and yet the percentage of blondes featured in Vogue magazine has been found to be 35.7% and in Playboy even higher at 41.2%.

If you’re trying to attract attention, it seems blonde is the way to go. A French study found that if 18.9% of men would stop for a blonde woman if she was stopped at the side of the road, but this fell to just 13.9% if the woman was a brunette.

Similarly, a study conducted by psychologists Viren Swami and Seishin Barrett found that when a woman dyed her hair and stood at a bar in a nightclub, she was approached significantly more often than when she was wearing a brown or red wig.

One theory for this was that the blonde woman was considered more ‘needy’ and therefore men felt they were in a better place to assert their dominance.

Speaking with Salons Direct, Prof. Swarmi explained how hair colour is just one of several factors that could have contributed to these results.

He said: “Something like face or body attraction plays a much larger role than hair colour in reality, especially for men. Rating someone as attractive is very different from thinking they’re attractive and then going to approach that person. It could be that men see women as more approachable or even more promiscuous, so they could be thinking they have a better chance with her if she’s blonde.”

It also seems that people are likely to give more money to blondes than those with other hair colours. When collecting for charity, it was found that households are 35% more likely to donate to a blonde than a brunette, whilst blondes apparently receive a 7.94% increase in tips when waitressing – This means that if a waitress spent £50 dyeing their hair blonde, they would still make on average £1,150 more per year in tips than a brunette.

However, if you want to make your way in the world of business, blonde might not be the best choice. Only 5% of CEOs in the top 500 FTSE listed companies were found to be blonde, whereas only 12% of women thought that blonde was the best colour hair for making a good first impression at a job interview.

Does being brunette make your smarter?

We’ve seen that blondes aren’t considered top of the tree when it comes to business, but is that just because brunettes are perceived as more intelligent?

In a 2005 study, men were shown images of a model with blonde, brown and then red hair – 81% judged the brunette to be more intelligent. And in the same study we mentioned earlier, 76% of women said brown hair was the best way to make a good first impression at a job interview.

Furthermore, 67% of women said that if they were a CEO and could only hire one person based on their hair colour, they would hire a brunette. Could this be because a study suggests brunettes have the highest work ethic, are more mature and are less aggressive?

Poor redheads. Research published by Nicolas Guéguen from the Université de Bretagne-Sud, in France, found that 80% of people displayed a dislike for people with red hair. Red-headed women have also been described as ‘temperamental’ and ‘intimidating’.

And if we thought blondes were poorly thought of in the boardroom, spare a thought for those with red hair. Only a lowly 3% of women thought having red hair would make a good impression at an interview, whilst only 13% said they would choose a red-haired employee if they could only choose based on hair colouring.

However, red-haired women were found to have sex more often than blonde or brunette women, on average three times a week, so it’s not all bad news redheads!

We’ve spoken a lot about others’ research, so we thought we’d do a bit of our own as well. We asked Salons Direct customers to look at the same woman with three different hair colours – blonde, brunette and redhead – and rate them for a number of perceived personality traits. Here are the results:

31% of respondents said the blonde woman was attractive, compared to 24% for the brunette and 20% for the redhead. This would back up the stereotypes we’ve mentioned about blonde being associated more with natural beauty.

Blondes were also considered more feminine, with 26% choosing this trait compared to 13% and 16% for brunettes and redheads respectively.

Similarly, 18% said the brunette was sophisticated compared to just 9% for the blonde. The redhead, however, was classes as ‘fiery’, with 21% reinforcing that stereotype.

The majority of our findings have supported many of the various other pieces of research conducted, as well as the traditional stereotypes, showing that hair colour definitely still plays a role in how we perceive people.

Does this have any basis in reality?

This is all incredibly fascinating but why do we have these preconceptions? What is the psychology behind it? And does it really make a jot of difference in reality?

We chatted to Viren Swami, a social psychologist from Anglia Ruskin University, who conducted one of the aforementioned studies involving women with different hair colours being approached in a bar. We discussed why colour is important and if we should pay any attention to it.

He said: “Colour is emotive, which is why we make judgements based on it. It is just one of the dimensions that shape our judgements – there is a very complex relationship between hair colour and interpersonal judgements. There are a lot of other things going on at the same time.”

Viren said he thinks it’s clear these stereotypes still exist and, although they may be damaging, we’re better positioned to now question them.

However, he was clear to stress that the colour of one’s hair has no actual relationship to their personality: “There is a big difference between the stereotype someone has because of their hair colour and their actual personality. Evidence suggests that there are very few, if any, differences in personality or psychology based on a person’s hair colour. Those stereotypes have no basis in reality.”

So whilst these stereotypes and preconceptions seem as deep-rooted as ever, we also know that they have no real bearing on what we’re like as people. At the end of the day, the only thing that really matters when it comes to your hair colour or style is that it makes you happy and feel great.